How to Make Powerful First Impressions & Guarantee Follow Up 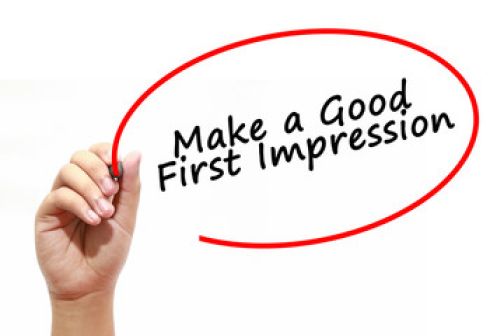 Could we make meeting someone for the first time sound any more daunting?  Humans are judgmental creatures, that’s a fact.  Most social scientists agree that first impressions are formed within the first 7-11 seconds of meeting someone new.

If this is true, how can you make your first few seconds count and ensure that you make a favorable and lasting impression that leaves the other party begging to follow up with you?

Psychologists have been studying the “first-impression bias” for decades and because of this research we know there is a science to making a powerful first impression. A motivated individual can use this information to create a bulletproof first impression system that guarantees results.

Why do first impressions matter so much?

A first impression can provide opportunities that may not be readily available if a favorable impression is not made. If you don’t like or trust someone when meeting them for the first time would you offer them a job? Would you make introductions for them? Probably not.

So how do you show that you’re trustworthy, likeable, and competent in the blink of an eye? Focus on the ABC’SS.

As much as well all like to believe the “don’t judge a book by it’s cover” axiom, when it comes to first impressions your appearance is a major factor. That doesn’t mean you have to wear a Tom Ford suit or carry a Louis Vuitton handbag to look sharp.  But you should dress for success.

A recent study by Hajo Adam and Adam D. Galinsky  published in The Journal of Experimental Psychology scientifically proves that what we wear effects how we act.

In the study, 3 separate groups were asked to spot the differences in 2 nearly identical pictures. Before asking the subjects to review the photos one group was given a Dr.’s coat, one group a painter’s smock, and the final group wore no coat.

The group wearing the Dr.’s coat consistently found the most differences between the 2 pictures. When asked to describe the people in the photos, the “Doctors” were also the most critical and judgmental of the photo subjects.

Your appearance affects how you interact with others and how you’re perceived by others. If you met someone for the first time would you rather be wearing smelly gym clothes or a great looking outfit guaranteed to give you compliments? Don’t fight an uphill battle, simply put yourself together before heading into a situation where you need to make a favorable first impression when meeting someone new.

The next aspect in the science of first impressions is in how you carry yourself and your communication skills. What does your body say before you even open your mouth? Do you look friendly, open, and approachable?

Over 50% of your communication is done through the use of body language, tonality, and hand gestures. Remember, when meeting someone for the first time the other person sees you long before you get a chance to speak.

Mark Bowden pokes fun at the speed in which first impressions are made in a recent TED talk [TED Stage]. He explains that by the time he reached center stage to begin his presentation the majority of the audience had already decided what they thought of him.

Through visual clues such as his appearance, facial expression, body posture, the audience formed an impression before the presentation even started.

The goal is to portray a combination of confidence and competence through your appearance and non-verbal cues so that when you do start talking, you’re already in a favorable position.

How is this accomplished? Start with your head up & shoulders back. Stand up straight and keep your hands visible.  Be sure to smile. Fidgeting hands and shifty eyes show nervousness, which can crush your credibility instantly.

During a first impression goal number one should be to charm and disarm. One of the most effective ways of building instant rapport is as simple as giving a genuine personalized compliment.

The National Institute of Physiological Science at the University of Tokyo did a study regarding how people react when given a compliment. The study determined that when someone hears a personalized compliment, specific to them, their brain reacts in the same section as if the participant was given a cash reward.

Use this biological feedback loop to your advantage and create a specific, personalized compliment within the first few moments of meeting someone. Maybe you weren’t wearing your finest clothes, or they caught you slumped in a booth at the coffee shop, a well-placed compliment is like a “get out of jail free card”.

When looking to provide a meaningful compliment, choose something unique that person and something that took effort on their part. Women’s hair, men’s watches, and shoes (for both sexes) are always great targets for compliments. Complimenting on something the other person has little or no control over will not create the same desired result.

Most people tend to speak quieter and enunciate less when they are nervous. This lack of confidence results in subconsciously making yourself seem small, quiet, and unthreatening. Unfortunately, it also ruins your first impression and causes you to be seen as a mumbling mess.

When it comes to your introduction don’t try for a witty one liner or a rehearsed joke that could backfire in your face. Start with a simple, “Hello, it’s a pleasure to meet you. My name is Brandon Slater”. Using your full name during an introduction helps you to seem more important and professional.

We are currently living the most ADD generation in history. In the last 15 years, our attention span has dropped from 15 seconds to a measly 8.25 seconds according to StatisticBrain.  What does that mean for first impressions? It gives you an opportunity to stand out from the crowd in a fantastic way if you play your cards right.

Make a concentrated effort to give your undivided attention to the other person for the first 10 seconds of meeting them. Rather than think about what to say, actually listen to the other person as they speak. It may sound simple, the rules of etiquette haven’t changed all that much. So remember to mind your manners.

Focus on maintaining eye contact and actively listening as the other person speaks. They’ll normally give you plenty of information to use to continue the conversation. If you truly want to stand out from the crowd, avoid the generic “so what do you do” style of questions. Be genuinely curious and interested in the other person and let the conversation flow.

Overall, a great first impression stems from your ability to show confidence and interest in the other person. Use the appropriate non-verbal cues to show your openness, speak clearly, and use compliments.

A first impression is created in just a few moments but that impact, if done well, can last a lifetime. Like most skills, becoming a first impression expert takes practice. So start today! Start in low stakes environments like coffee shops or the grocery store and hone your skills.

That way you know when you really need to shine before your next job interview or networking event you’ll have mastered the art of the first impression and have the confidence to back it up and leave the other person begging to follow up with you.

Eric Wargo & PsychologicalScience.org explain that in the time it takes for you to blink your eye, your brain has already created its initial impression. In this fraction of a second decisions regarding trust, likability and friendliness are made. Dr. Nadia Brown, MD & Dr. Michael Solomon, PhD believe that there are 11 critical decisions made in the first 7 seconds of your first impression. This is where the common belief a first impression takes 7 seconds stems from.

Although you may not be presenting in front of thousands, or looking to become best friends with everyone you meet, showing your best side during a first impression will lead to more pleasant encounters, stronger relationships and more opportunities.

To guarantee you are presenting the best version of yourself, one that is most likely to have a favorable response, we have put together the 5 simple and effective tips.

The Benefit of Using an Executive Search Consultant

Creative Teams: How to Lead and Manage Them

How to Manage Freelancers without Losing Your Mind